The sky was uncharacteristically dark for a mid-September morning. Steel gray clouds concealed the sunrise, blanketing the streets in darkness. I scanned the sea of runners gathered around me, and nervously searched for the entrance to corral A.

“Good luck, Honey!” my husband encouraged, wrapping his arms around me.

How could he possibly forget? I’d been giving him explicit instructions to meet me at designated mile markers along the race course for days. We had even driven the course the night before, so I could point out the places he and my much needed energy bites needed to.

Withdrawing from our embrace, I hastily walked across the rain soaked lawn, located the corral, and wove my way through the horde of runners who were either jogging in place, or anxiously bouncing from one foot to the other, or talking strategy with fellow runners.

Once in the corral, I hesitated. I spotted a pace leader holding a “3:45” sign, and thought, “Why not?”  I made my way to a spot void of runners immediately behind him. Glancing at my Garmin, I realized five long minutes stood between me and the start of the race.

I occupied my mind by running the numbers—3 hours, 45 minutes—an eight and a half minute mile pace, 4 hours—about 9.  I’d start fast, and then slow down. 4 hours would be very doable. It was an aggressive pace, but I could back off and easily finish in under four hours (which was the goal I publicly acknowledged). I had accomplished this last year; anything less, would be failure.

I smiled, remembering that day just one year ago. I had finished my fourth marathon, PR’d by eight minutes, and qualified for Boston. Not a bad day.

I had felt invincible. Nothing hurt. “The Wall” never fully materialized.

A mile from the finish, my husband had greeted me with, “You’re going to finish in under 4 hours!”

Suddenly it hit me. I was going to PR! The fatigue that had begun to invade my body at mile 22 was quickly forgotten.

Passing through Kimberly Point, I thought about how good life was. I wound my way along the shoreline of Lake Winnebago, gazing at the sailboats navigating into the open water. I couldn’t wipe the smile off my face if I had wanted to.

Rounding the final bend, I entered Riverside Park. Crowds of supporters lined the streets and filled the stands, cheering wildly as runners approached the finish line. I took in the moment, much like I took in the moment of each of my children’s births. It was a feeling I wanted to remember forever.

I caught site of the finish line and the time clock. 3:53! I couldn’t believe it. My throat constricted, and tears welled up in my eyes. I was emotionally overwhelmed.

The starter’s horn jolted me back into the present.

Shuffling toward the start line with thousands of other runners, I crossed over the electronic mat,  and struggled to locate my Garmin hidden beneath my long sleeve shirt. I pressed the start button, signaling that my race had begun. Nervous excitement filled my body.

I prayed my left knee would not fail me. It had been a source of discomfort for months. I had tried everything possible to rid myself of the pain, including a cortisone injection under my kneecap.

I breathed deeply, and focused on relaxing my tense upper body.

For the first mile, I eavesdropped on conversations of other runners, enjoying the camaraderie.

I smiled and laughed.

I felt sluggish, but with good reason. I was running at a pace that was not natural for me. Besides, the first three miles of a run never feel good, no matter what distance I’m running. I tried settling in.

A symphony of chirps emitted from the watches of runners surrounding me as we reached the one mile marker, causing me to smile. Runners. So predictable.

Passing the 5 mile banner, I realized I hadn’t even given my knee much thought. I felt a glimmer of optimism. I was running pain free. Not even a twinge.

My husband met me at mile 6, providing me with my homemade energy bites. I anticipated a burst of energy.

Somewhere around mile 8, I slowed. The burst of energy never arrived. I knew I could not keep up my current pace. Disappointed, I eased up, and watched the 3:45 pace group disappear.

Looking over my shoulder, I realized I was alone. I was grateful the next pacing group was nowhere to be seen.

My energy level continued to crash.

“What the hell?” I mumbled to myself, frustrated beyond words.

I struggled to make it to the halfway mark (13.1 miles) in under 2 hours. Now, the only way I would meet my goal would be to run a negative split. Shortly after this realization, the 4:00 pace group passed me. I was overwhelmed with disappointment.

And then I saw my supportive husband, riding his bike, and holding my energy bite. Just thinking about it made my stomach churn. My mind struggled for the right answer. My magical little energy bite or a banana? Bile rose in my throat.

“Eat something,” I reasoned with myself.

My gaze shifted between my husband with the energy bite and the woman holding the bowl of bananas. The bananas won, if for no other reason than peeling it would provide an excuse to walk.

I slowed my already slow pace, grabbed a banana from the bowl, forced a smile and mumbled “Thank you,” before veering off to the side of the road where I allowed myself to walk.

“How are you feeling?’ my husband hesitantly asked, pedaling up beside me.

“This. Sucks,” I told him, averting his gaze.

I walked on silently. Miserable. A cardboard box garbage can was 20 feet ahead of me. I finished my banana, and flung the skin into the garbage can…and missed.

“Really, “ I grumbled, rolling my eyes.

As much as I wanted to walk, I realized it would take me forever to finish, so I started to jog

And then, just when I thought the day could not get any worse, it did. A slight twinge on the side of my left knee, quickly escalated into a sharp, stabbing pain. I changed my stride, favoring my right leg, in an attempt  to lessen the pain. (Never a good idea, by the way.) Sure enough, it didn’t take long for my right hip to join in the revolt.

Mile 18. Another aid station. Another banana. Another opportunity to walk. Another unpleasant conversation with myself.

The pain in my knee eased when I walked.

“You’re not a quitter,” I rallied. “Pain is temporary, pride is forever.” I tried recalling all the inspirational t-shirt sayings I’d ever seen.

Before I knew it, the mile 20 banner was in sight.

At the 23 mile mark, I looked at my Garmin and saw my time. Disappointment came flooding back. My heart sunk. I was five minutes away from last year’s finish time, with three miles left to go.

Simply finishing had not been my goal, as it had been in every other marathon I had run. My goal had been to beat last year’s time.  And I was not going to do it.

My anger pushed me.

I began to anticipate the end of the race. Despite the fact that my body was screaming for me to stop (my knee being the loudest), I kept going, fueled by anger. And disappointment.

Running over the bridge, linking Doty Island to my hometown, I was greeted with “Way to go, Mrs. Hovie,” and “Looking good, Karen!” I smiled weakly refusing to make eye contact, as personal disappointment outweighed my supporter’s enthusiasm.

The final .5 of the race is inarguably the most beautiful of the entire race. Exquisite mansions line Wisconsin Avenue. Tall, broad oaks, on the cusp of full brilliant color, form a canopy over the narrow road winding along the shore of Lake Winnebago. A beautiful lighthouse graces the peninsula marking the entrance of Neenah’s harbor.

But I wasn’t having any of it. Last year I was enamored by the beauty. This year I was only aware of my failure.

I rounded the final curve, and the finish line came into view. I could hear the crowd cheering, as the announcer congratulated the runners by name as they crossed the finish line. I, however, fixated on only one thing: the clock and its announcement of my failure. I prayed the announcer would skip over my name, and I could disappear into the crowd unnoticed.

But then I heard it. “Karen Hovie from Neenah!”

“Where was he last year when I totally kicked ass?”

I crossed the finish line and pressed the “stop” button on my Garmin. I couldn’t bare to look at the time. A mylar blanket was quickly draped around my shoulders, and I shuffled through the finish gate, ducking my head as a finisher’s medal was placed around my neck.

The step up from the street to the curb was physically painful, but I would have taken that step hundreds of times if it would have lessened the pain of disappointment I was feeling. Just wanting to go home, I forced myself to keep walking. Making my way to a table stacked high with t-shirts, I received my finisher’s shirt, and wound my way across the muddy, trampled park.

I bypassed the line of exhausted runners at the food tent, the aroma of roast beef sandwiches causing 26 miles worth of energy bites and bananas to rise from my belly to my throat. I grabbed a bottle of water, before searching for my husband who I quickly located. He again wrapped me in his arms, sweat, disappointment and all.

Reluctantly, withdrawing from our embrace, we slowly started toward the car. Just as we were about to exit the park, I stopped abruptly. Sensing that someday the memory of the race wouldn’t be so painful, I asked my husband to take a picture of me, with my t-shirt and finisher’s medal.

Perhaps the lesson is about listening to your body, and trusting what it ’s telling you. But I”m not really feeling that either.

Maybe the lesson is that one event doesn’t define who you are.

Or maybe, just maybe, this isn’t the end of the story. It’s just part of my journey. 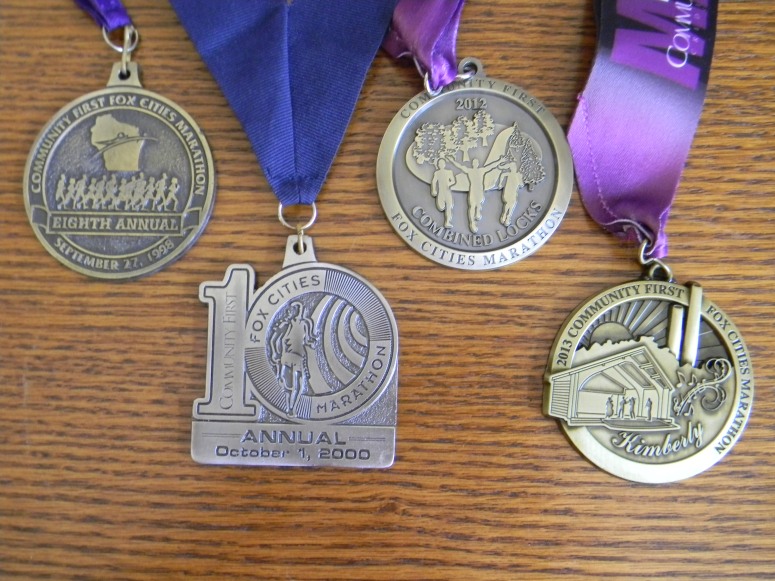 3 thoughts on “I’m Finally Ready to Talk About It”