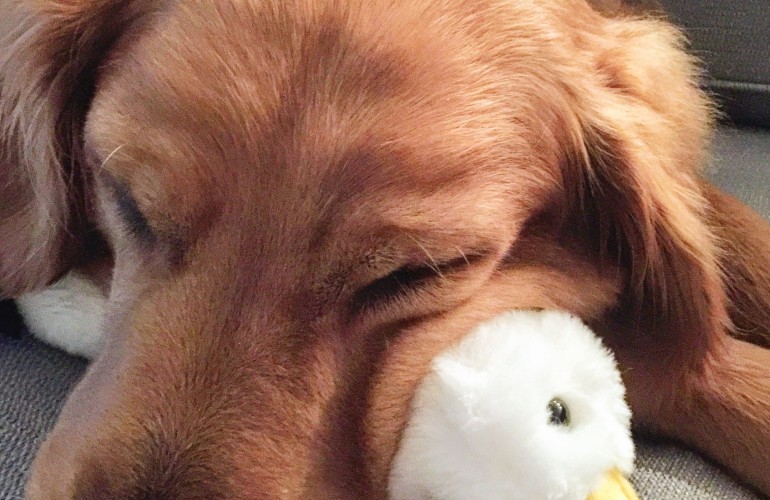 Well, there you have it, folks.

Christmas is officially over.

Never mind the fact the tree has been down for well over a week and the traditional Hovie candy canes (ceremoniously handed out on Christmas Eve by Gma and Gpa Hovie with strict instructions to ‘suck and think of the fam’ on the 12th day of Christmas) have been sucked.

It’s over because this is my final cup of Trader Joe’s Candy Cane tea.

Today is a big day!

Well, because this little girl is eight years old today.

(She’s actually resting up for her birthday treat. She knows there is a trip to Dairy Queen in the near future.)

So Quinn is turning the big 0-8, but we’ve only had her since she was three.

Want to know a not-so-secret secret?

I never wanted a dog.

Never been a dog person.

(And yes, I am well aware this list could also apply to kids, and we had three of them.)

Truth be told, I just could not envision myself loving a dog.

So the fact that we have one is more than a bit surprising.

Our dogless lives changed about 5 years ago, when our son Logan called (called…not texted…and if you knew Logan, you’d know this was already a big deal) from school and asked us if we wanted a dog.

Rather brave of him.

Sarah was (and still is) Logan’s girlfriend. Her parents passed away within a few years of each other, and Quinn needed a home.

When the hubby found out Quinn was a golden retriever, his face lit up.

A golden just so happened to be his dog of choice (as I knew from our talks about why getting a dog was not a good idea).

He looked at me, unsuccessfully concealing his smile.

In that moment, I knew.

We were getting a dog.

A month later, I met Quinn.

I feigned interest and excitement for our new family member. I knelt down and awkwardly scratched her behind the ears. Quinn demonstrated her appreciation by knocking me over. Her nose was in overdrive, sniffing us and everything around us. She just couldn’t keep still. Her leash tangled around our legs.

You bet I was overwhelmed.

But yet here we are, almost 5 years later.

Want to see a picture of my sweet little Quinnie dog?

I may have a few to share with you.

You get the idea. I have more pictures of her than I do of my kids.

And we definitely spoil her more than the kids.

She gets homemade doggie treats.

She is the best dog ever.

Really. I assure you, I have never said that about any other dog.

She loves to go for car rides (even when it means spending days in the car).

She loves going for walks (unless, of course, she doesn’t feel like going for a walk).

She loves her humans (and insists on being with us. All. The. Time).

She loves other humans (but has no interest in other animals…except for maybe squirrels.)

She loves cuddle time (and has somehow managed to make herself welcome on the bed on Saturday mornings or when there is a bad storm at night).

She loves her stuffed animals and gently carries them with her all over the house. And yard.

She loves sitting on laps (all 75 pounds of her).

And she is the queen of forehead time. And if you don’t know what forehead time is, you really should go get a dog.

Because forehead time is everything.