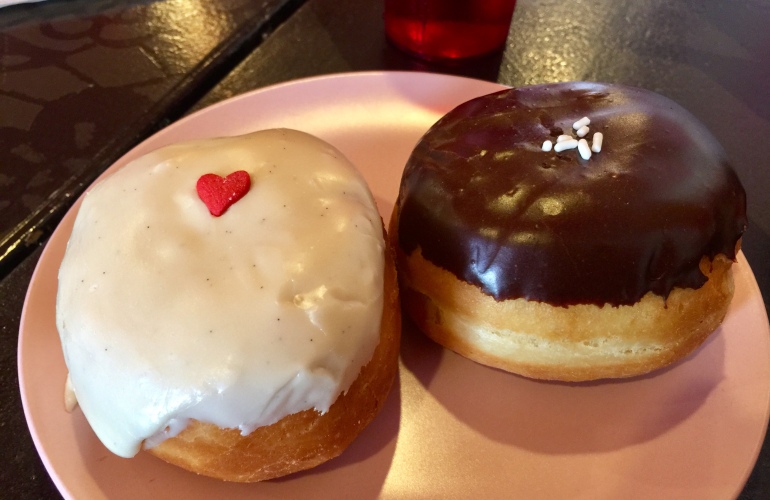 Last Wednesday was my middle child’s 24th birthday, and as luck would have it, he was flying back to the Midwest to help out at his alma mater’s indoor conference track meet this past weekend. This provided the perfect opportunity to meet up and celebrate!

After two long days of teaching and conferences, I was more than ready for a change in scenery. Unfortunately, the hubby’s work schedule has been a little frantic as of late, so we weren’t able to head out of town until Saturday morning.

This worked out okay however, as it gave me time to get all my ‘weekend chores’ done before we left. I very much appreciate coming home to a clean house and an empty laundry basket.

We woke up early Saturday, and walked Quinnie.

I had lots of guilt leaving her behind, but we are very fortunate to have an excellent puppy sitter!

I packed up some tofu scramble leftover from Friday’s breakfast, as I was craving savory instead of Starbuck’s oatmeal. I forgot to douse it with hot sauce, but it was tasty nonetheless. (Cast iron pan = extra iron)

After a stop at Starbucks, we were on our way— a soy latte for me (opted for the regular amount of shots today due to a little episode earlier in the morning) and a soy chai latte for my non-coffee drinking husband.

We turned on The Message, and headed west. Is there anything better than drinking coffee, listening to good music, and engaging in great conversation with your best friend?

4 hours flew by, and before I knew it, we were rolling into St. Paul.

Stop #1…a quick bite to eat at one of our favorites…Shish. The food is tasty and I love the vibes of this place. 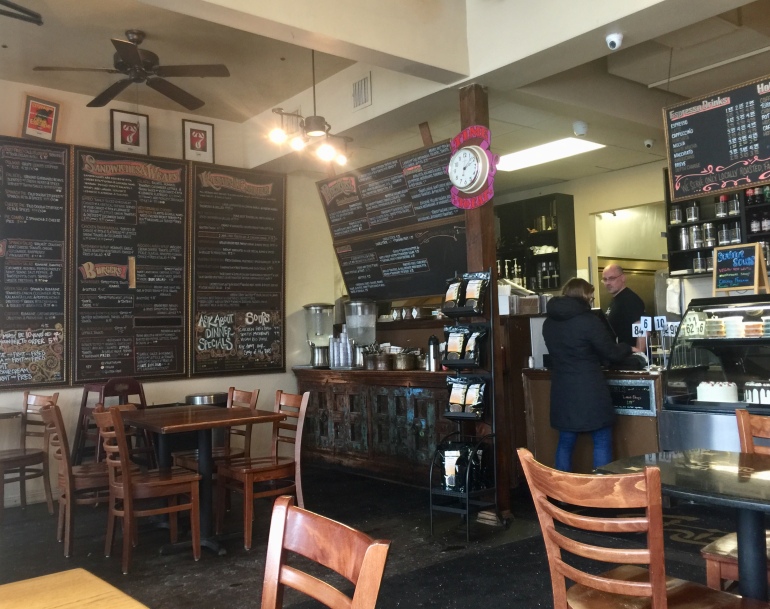 I opted for the Portabella Burger. See the hummus hiding under the bun? This totally makes the burger. And the fries? Incredibly worthy. I don’t know what they season them with, but they are so yummy.

The hubby had his usual gyro. Funny thing…after eating here at least a dozen times, he finally realized that tzatziki sauce contains cucumbers. He hates cucumbers. (Or so he thinks, anyway.)

Lots of snow in the Cities, and they were in for another 6″ that night. I love a good snowstorm.

As we headed into The Leonard Center at Mac (where the meet was being held), the snow was already beginning to fall. 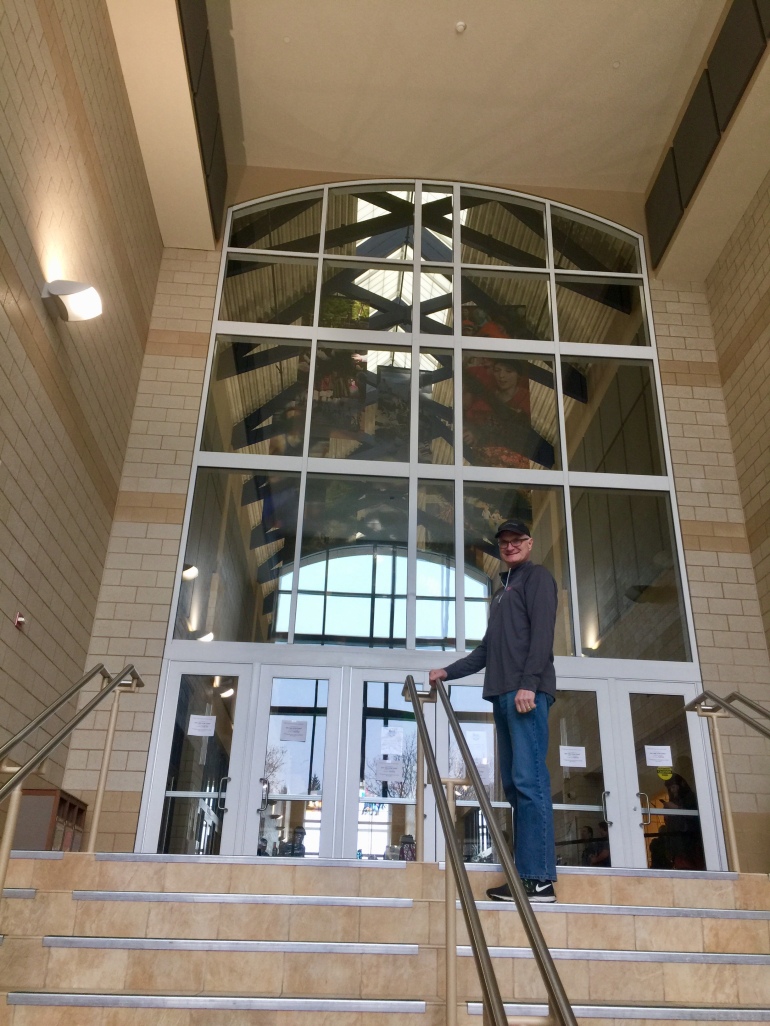 We found Logan, who was busy doing the officiating thing.

We gave him a quick hug, and then settled in and watched the meet. I love watching track and field (even more so in a climate controlled environment). I have a great appreciation for sprinters. I just don’t get how people run fast.

Couldn’t help but take a picture of this. 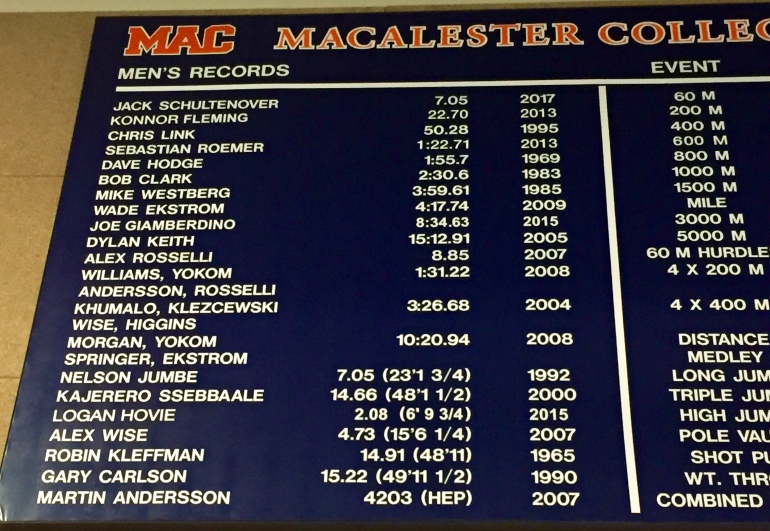 After the meet, we met up with some of Logan’s friends (two from his college years, and one he has known since 3 year old preschool) to celebrate his birthday. The Birchwood Cafe is one of my favorite places in the Cities, so I was happy when he chose to eat there. 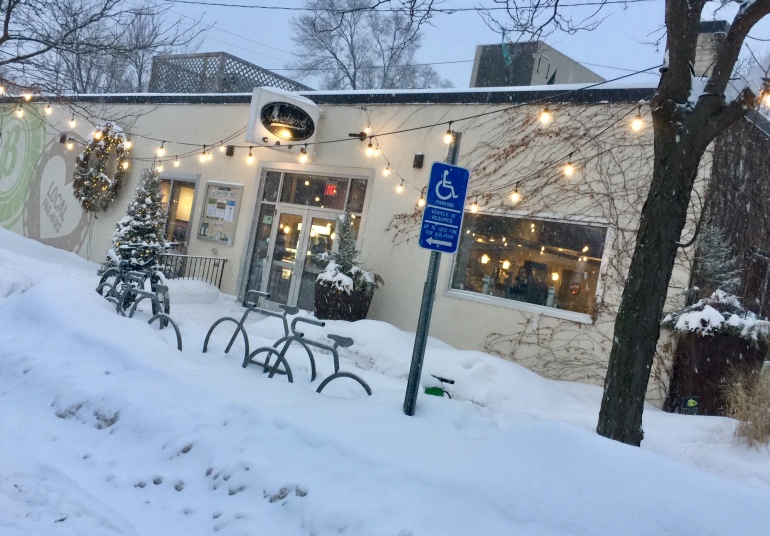 I had the Green Curry with Cajun Tempeh. To die for. 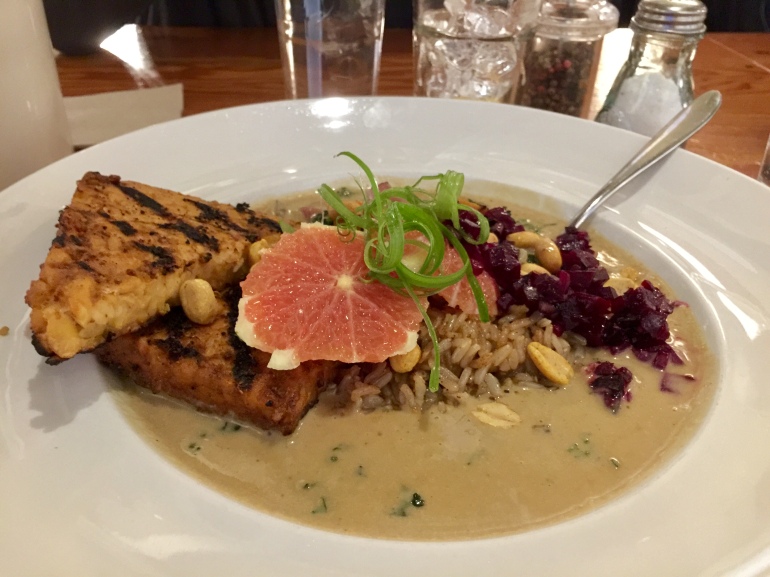 We had a great night of conversation…lots of laughs. Sadly, the evening came to an end way too soon.

Reed and I headed to our hotel. Because of the incoming snowstorm, we had decided to stay downtown Minneapolis, sin order to have underground parking. We checked into the hotel, but when we went to park, all levels of the parking garage were filled to capacity. Between the special event at the hotel and the snow emergency, parking was at a premium. After finally figuring that out, we went to find our room, which could not be accessed by the main elevators. We of course didn’t find that out immediately.

Thankfully, the room was worth all the effort.

Other than hearing an argument outside our room at about midnight, and  snow plows at about 3:00, I slept soundly.

We woke up to this: 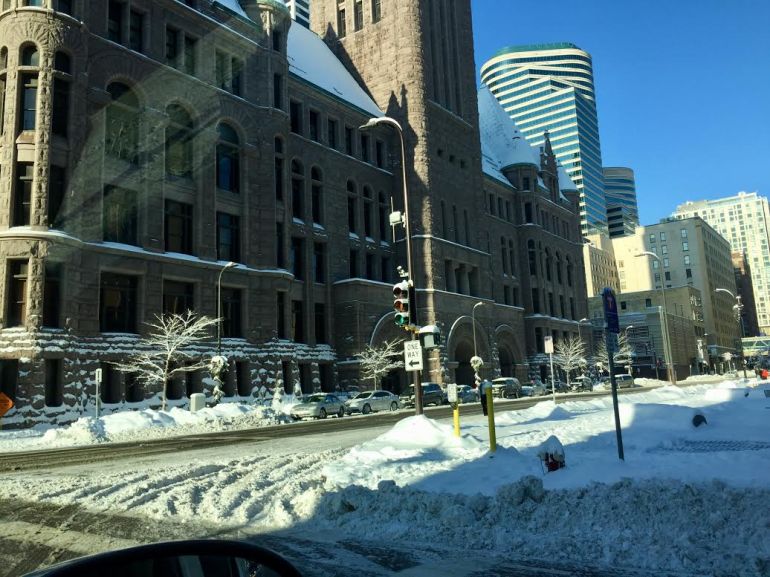 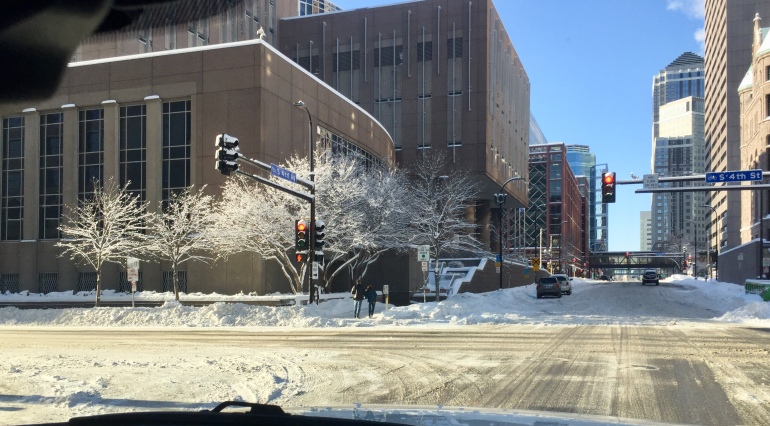 It was absolutely beautiful. I’m a little jealous…we really haven’t had a snowy winter in Wisconsin, and I love snow. (At least until March 1st, anyway.)

We planned on meeting up for breakfast, so we navigated through the snow covered streets! Notice the bike lane… 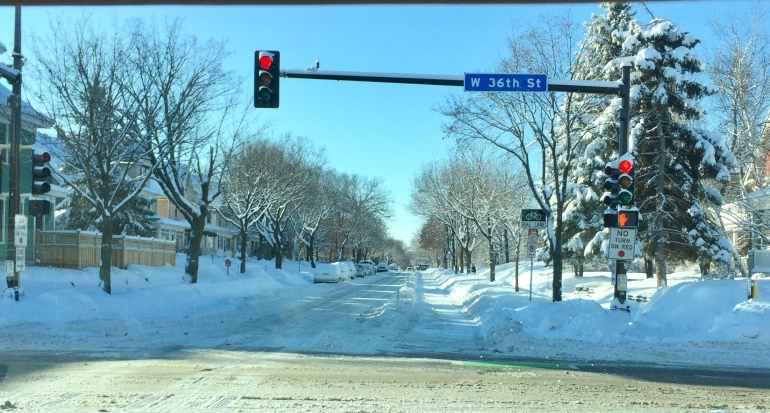 if you look closely, you will see a bike rider. Gotta love Minnesotans. 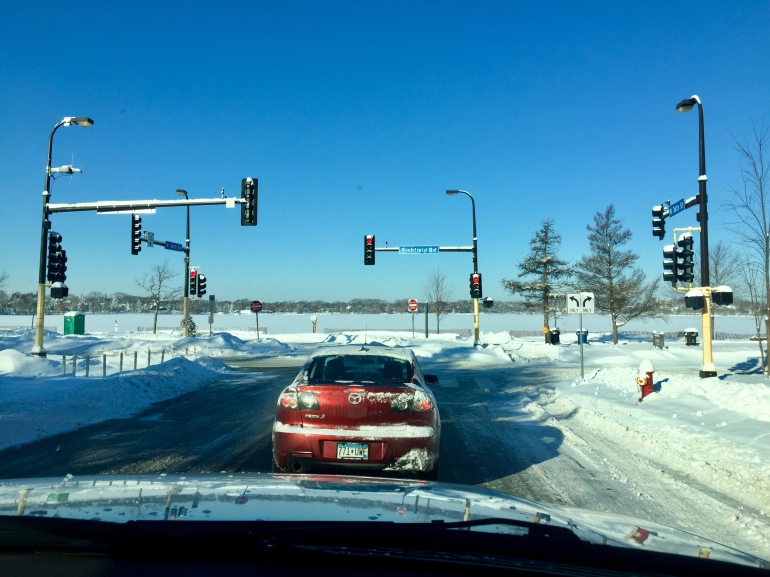 Breakfast was at Glam Doll Donuts.

Femme Fatale and a Dark Angel for me.

We dropped Logan off at his friend’s house (sunglasses on, of course) as his flight wasn’t until later, and began our journey back home via The Mall of America (didn’t buy a thing) and Trader Joe’s (stocked up on my favorites…Cookie Butter anyone?).

And here I am, back home safe and sound. After hitting the publish button, I’m grabbing a glass of wine and settling in to watch The Bachelor.

Hope your weekend was as enjoyable as mine!

4 thoughts on “A Whirlwind Trip to the Twin Cities”