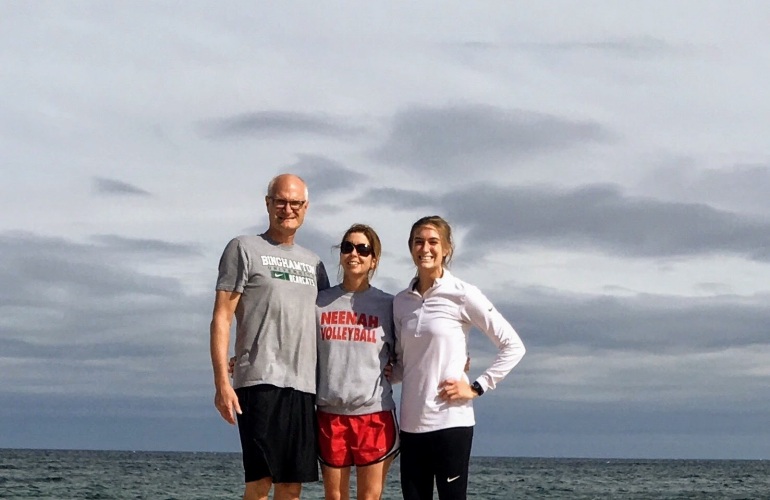 This will forever be remembered as the vacation that almost wasn’t. About a week and a half prior to our departure, we discovered our camper (not pictured) had some serious frame damage. This required some quick action (kind of a big deal for two people that thrive on advanced planning).

Not stressful at all. 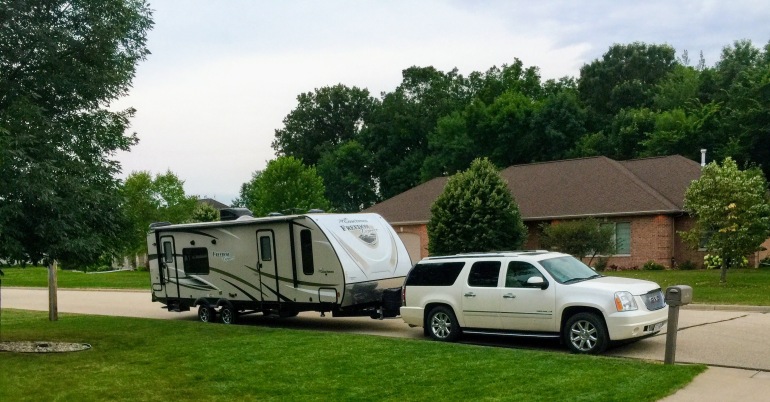 We woke bright and early Wednesday morning, hugged the dog and our youngest (both of whom were left behind) and we were on our way.

Breakfast on the road was Starbucks. Nothing overly memorable, just oatmeal with nuts, dried fruit and a banana. I did, however, greatly enjoy sipping my grande triple shot soy latte. Made traffic in Chicago somewhat bearable.

My goal was to work on school stuff as we drove. Yeah. That didn’t happen.

After traveling through Wisconsin, Illinois, and Indiana, a mid-afternoon pick me up at an Ohio travel plaza was needed. I tried the iced cascara coconut milk latte. It was so sweet I could feel the enamel of my teeth being eaten away. Lesson learned.

Meals along the way weren’t terrible. That’s the best I can say. 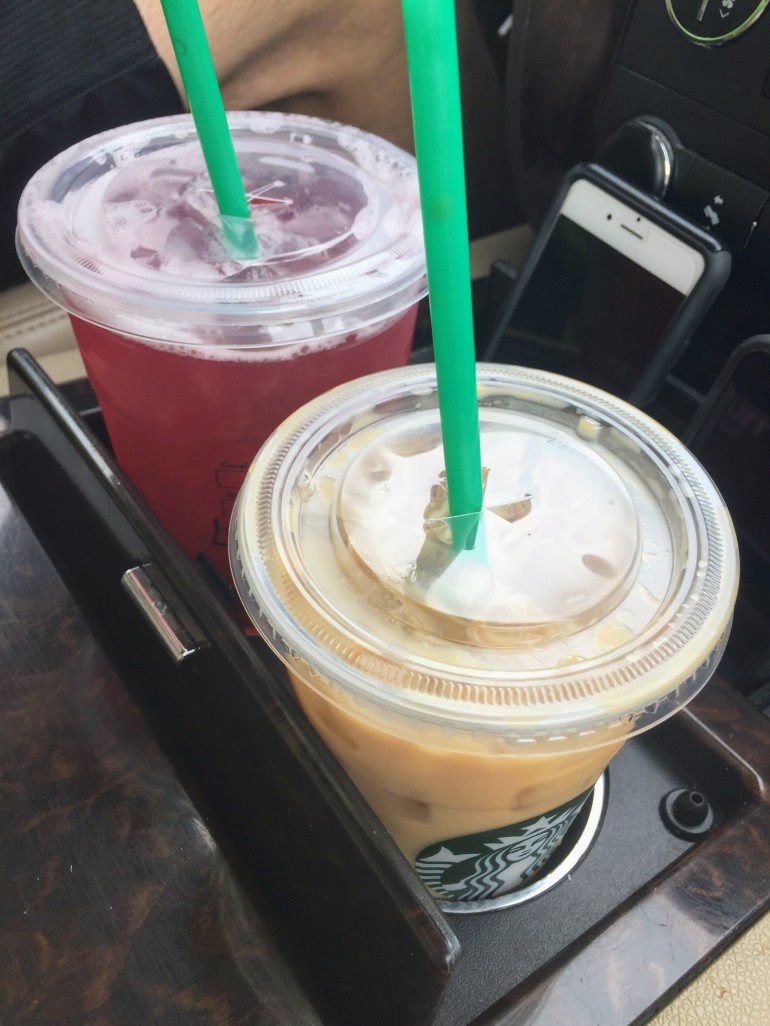 Our scheduled stop for the night was in Mercer, Pennsylvania. We made it before dark, and set up the camper for the first time without any issues. Professionals.

Thursday morning we were up bright and early for another fun filled day of driving. A quick breakfast in the camper consisted of cantaloupe and mango, and Kashi Cinnamon Harvest cereal. 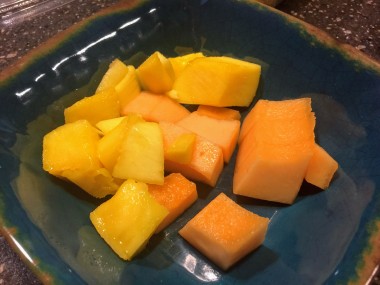 I opted to not make coffee (or chai tea for my hubby who isn’t a fan of coffee…I know, I know…what was I thinking when I said ‘I do’), as

B.) I was hoping for a Starbucks stop.

Boy was I disappointed. Pennsylvania is gorgeous, but options are extremely limited when it comes to restaurants of any kind along interstate.

After a day of listening to the 80’s on 8 and The Message, we finally rolled into Rhode Island at 6 PM Thursday night. We set up the camper and headed to Providence to meet up with Kristin, our oldest, for dinner.

She knows the Providence food scene well! No disappointments. What. So. Ever.

We ate at a place called the Grange, a vegetarian/vegan restaurant. (Poor lighting = poor picture quality) 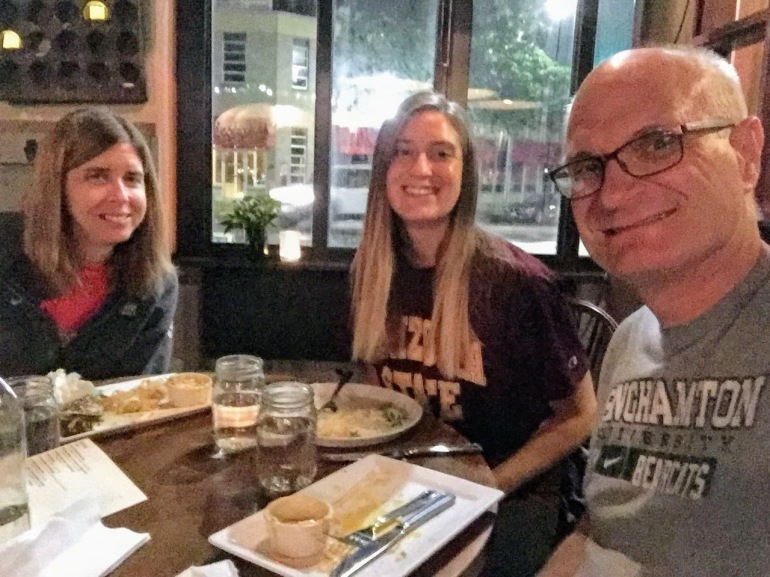 While not overly photogenic, this was a-ma-zing.

I followed this up with a Po Boy made with crispy shitake mushrooms! OMG!!

Afterwards, we strolled the streets near Brown University near K’s apartment, stopping for some ice cream… 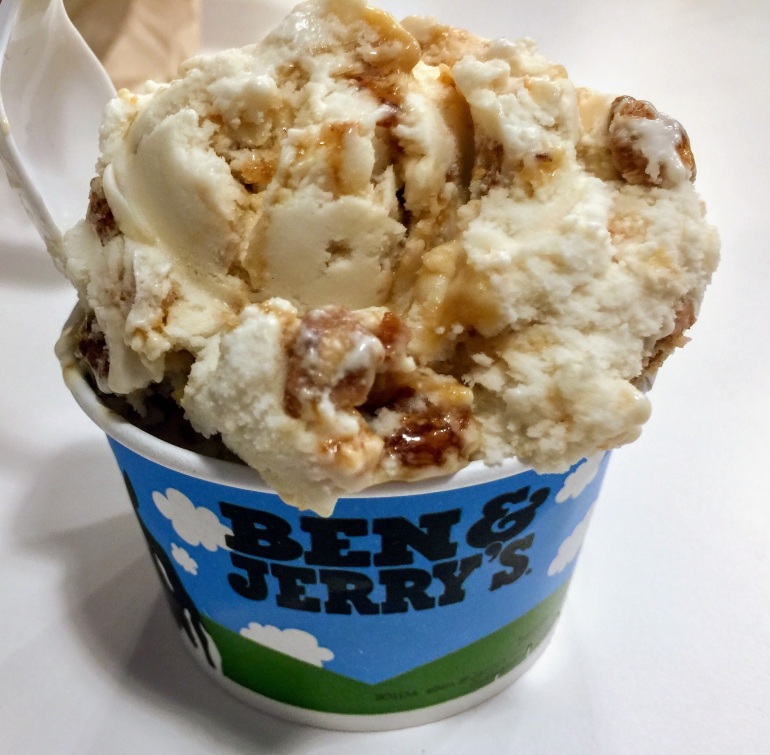 Caramel Almond Brittle is my new favorite BTW. (Just in case you ever wanted to treat me.)

We dropped Kristin off at her apartment and headed back to our campsite, about 40 miles south.

Thankfully, we had no big plans for the next morning, so we slept in (7 is late when you’re our age) and I made chia oats for breakfast. 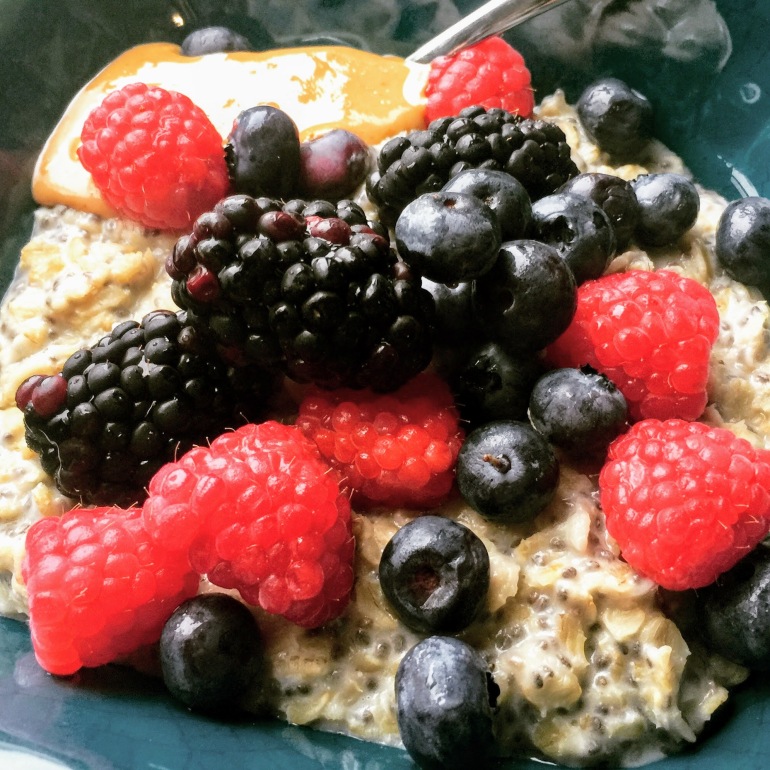 We spent the rest of the morning touring around the southern coast of Rhode Island. Kristin worked on Friday. (It’s kinda rough being a responsible adult when others are on vacation.)

Reed and I loved sightseeing in Westerly and Watch Hill…we even saw Taylor Swift’s Rhode Island home. No sign of Taylor, however. I should have taken some pictures, but I was too busy gawking at the beachside mansions.

We drove up to Boston to pick Kristin up after work, and hung out for a while. Dinner was at Veggie Galaxy. I am only a TAD BIT JEALOUS of all the vegetarian/vegan restaurants available. 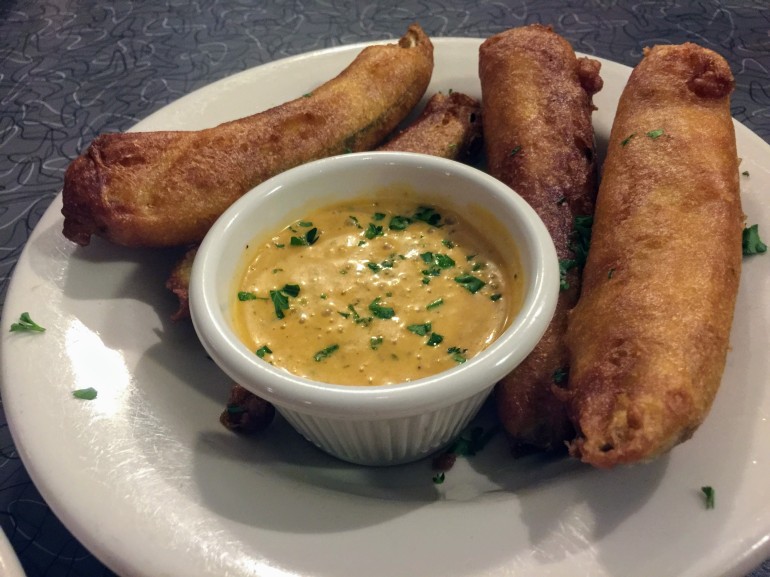 I opted for the “tuna melt” accompanied with potato salad and greens.

Afterwards, we drove back to Providence so Reed could do some handyman work at K’s apartment.

Saturday morning was rather dreary. We took our time heading back up to Providence, stopping at Home Depot, and At Home (fun store), to buy supplies for a few more projects. (Starbucks too, if you must know.)

By the time the projects were complete, we were ready for some good food.

Lunch was at the Garden Grill. I had a stir fry bowl with cajun crusted tofu! This picture brings back fond memories. I salivate as I write.

And since no meal while on vacation is complete without dessert, we stopped at the vegan bakery next door. We got it ‘to go’, but in hindsight that was a waste of a container. I was digging in by the time we were out of the parking lot. Not only was there cookie dough on top of the cupcake, but there was a hunk of cookie dough inside as well. How does it not get cooked? I don’t get it. I could not find any evidence of it being injected after baking. It’s a mystery I tell you.

As we devoured our cupcakes, we drove to K’s favorite beach which was pretty deserted; it was a tad bit chilly…about 70 degrees with a fierce wind. At times, it actually felt like our skin was being sand blasted. Free exfoliation!

We spent the afternoon hiking the beach and watching some crazy windsurfers in an inland bay.

We grabbed a bite to eat before heading back to the camper with K in tow.

The next morning we traveled to Point Judith where we took the ferry to Block Island. I was only mildly seasick by the time we reached the island. 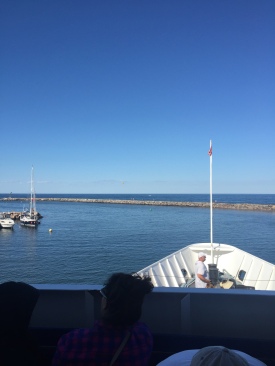 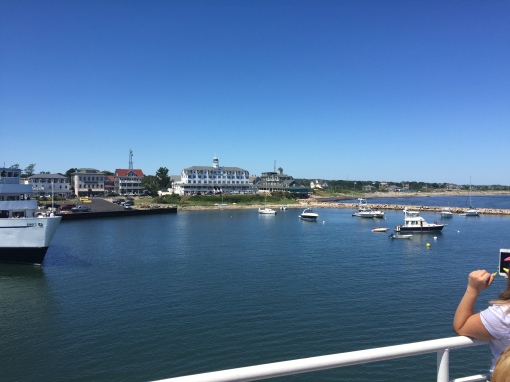 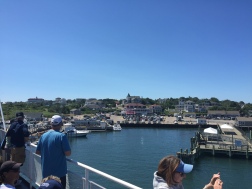 We biked to the north end of the island first and hiked out to the lighthouse. (That’s not snow on the lighthouse, btw. Lots of birds. Catch what I’m not saying?) 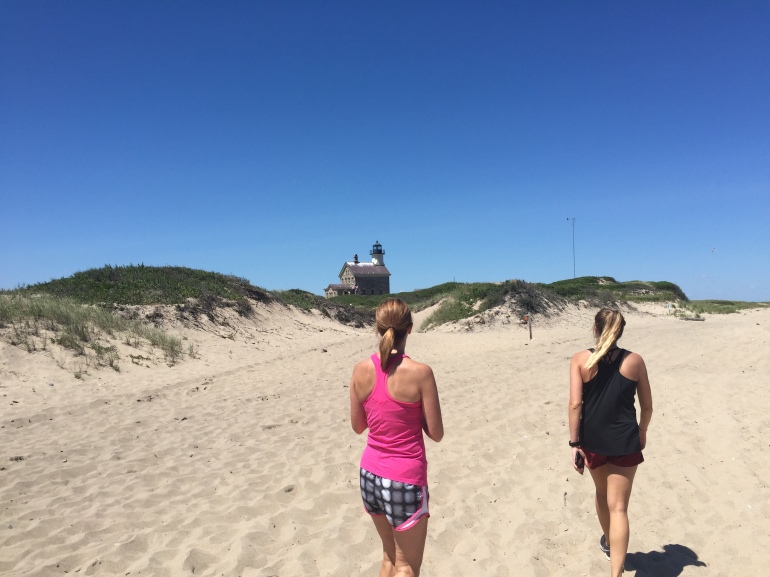 The waves were fun to watch as they crashed together on the tip of the island.

Weirdest island ever. No matter which direction we went it was uphill and into the wind. 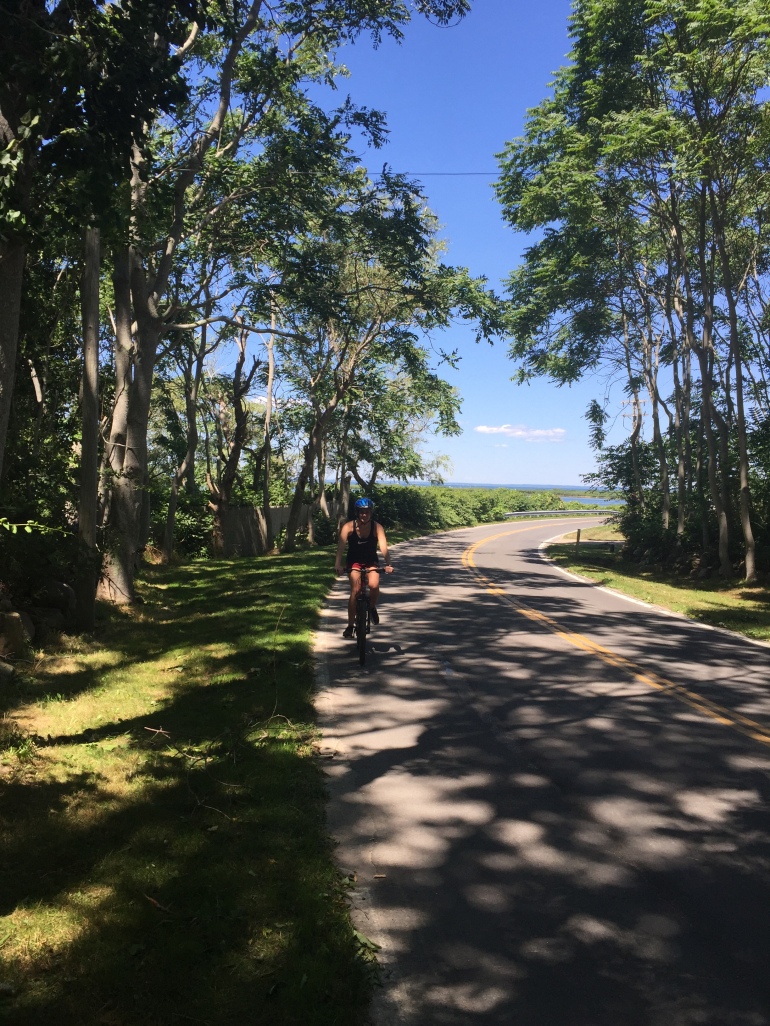 Perhaps that’s what made lunch so satisfying. We ate at The Oar. (Rather appropriately named.)

Okay, I don’t want to get all snarky, but I can’t help myself. My first choice was a Mediterranean wrap. I asked if they could hold the feta cheese and add hummus (which was on the menu). Our waitress was kind enough to ask the kitchen, but it was a no go. But yet after saying I couldn’t, she asked if I would like to add a protein. (I’m completely over it though. Haven’t even thought about it since. At all. Not even a little bit.)

My second choice was an Oriental wrap, which was absolutely delicious. Thank goodness.

After lunch we biked to the south end of the island. We made a few stops along the way and did more hiking. Here we did some stairs. Just for kicks. 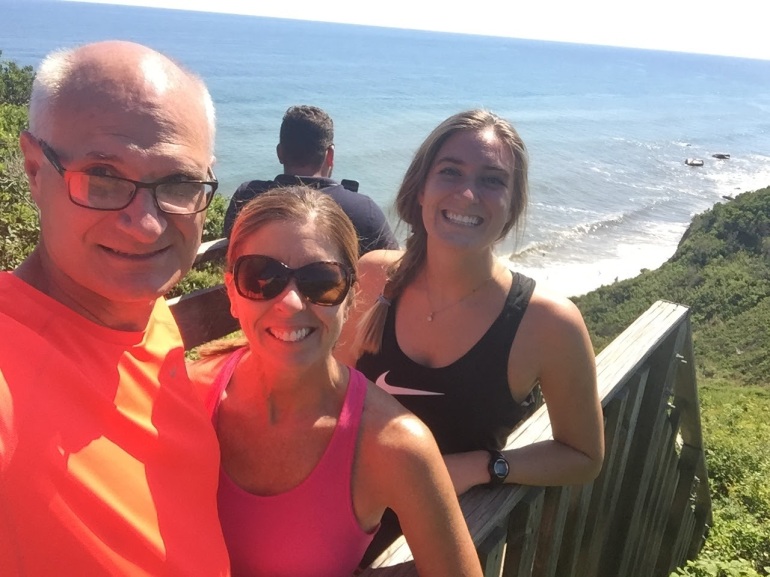 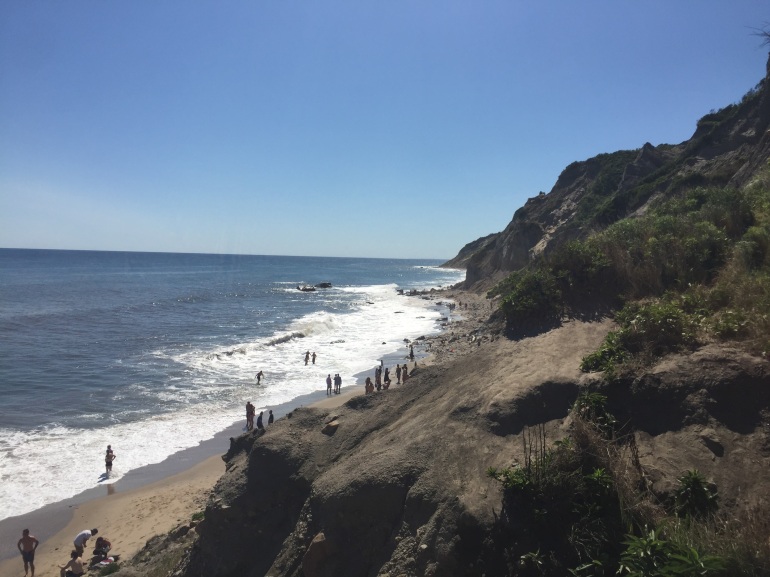 Go figure, we made it back to the ferry with just enough time to grab some ice cream at Ben and Jerry’s.

Breakfast Monday was avocado toast at the camper.

We spent the morning ‘working’. Reed reinstalled the shower door in the camper as it was put in backwards. I practiced patience (unsuccessfully) working on this post. Poor internet service just about pushed me over the edge.

We took a break for lunch, before heading up to Boston. 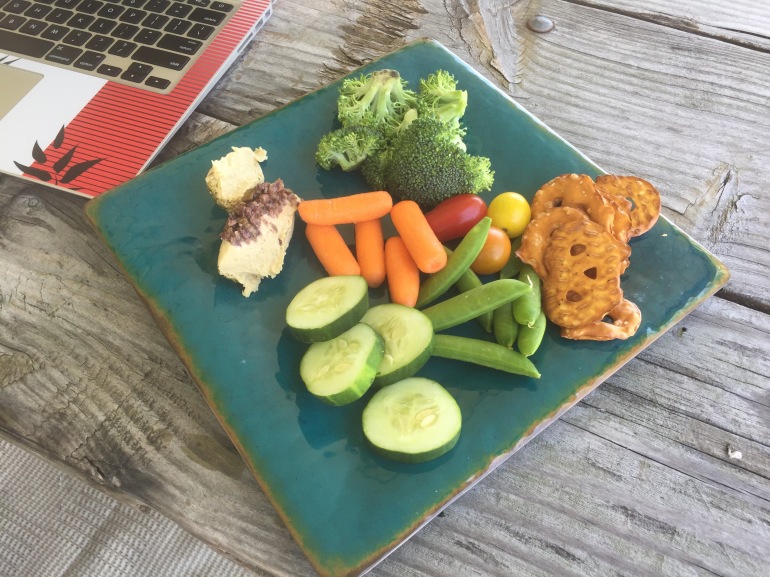 We picked up Kristin at work, and headed out to Wellesley to meet up with Alli’s boyfriend, Temi, who also lives in the Boston area. (Alli was experiencing some serious FOMO.) We took a brief detour to Boston College to stock up on some clothing since our middle child, Logan, will be attending law school there this fall.

We ate at The Local. And after dealing with Boston traffic, this Sangria was in order. It went down very easily. 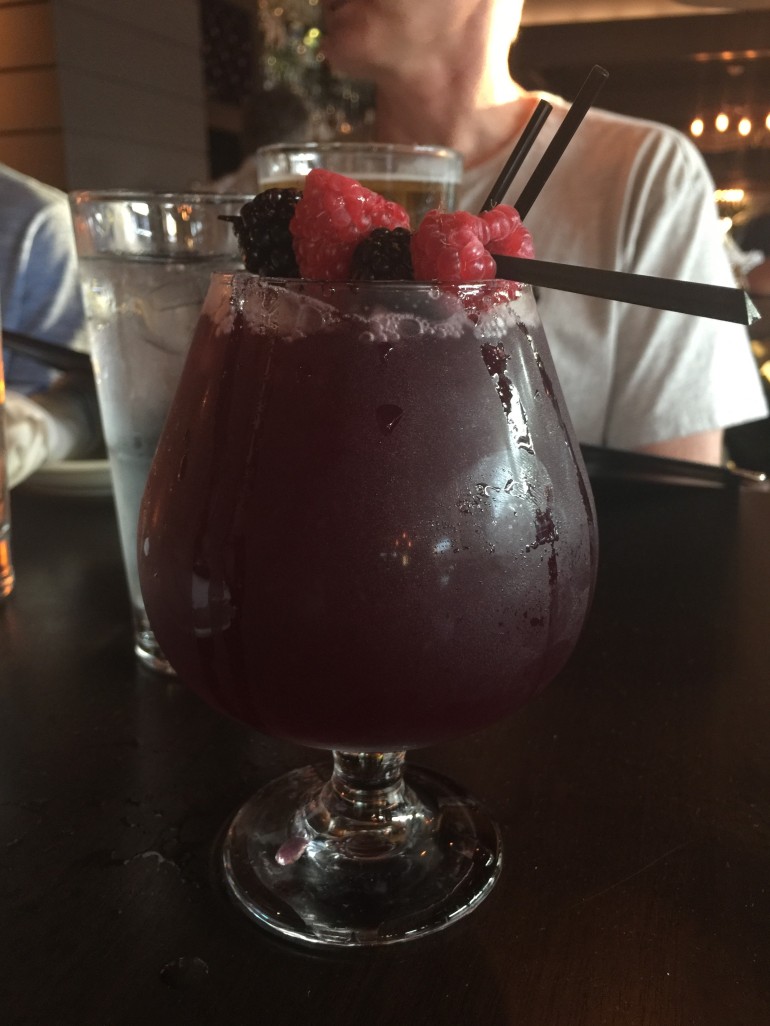 My entree: a spicy noodle stir fry with tofu, which I enjoyed.

And of course we needed ice cream before we headed back. (I actually opted for a matcha latte with soy.)

After saying our goodbyes to Temi, we drove back to Providence, dropping Kristin off at the train station where she had left her car.

And then we had to say goodbye to Kristin.

(I don’t know if I’ve mentioned this before, but I hate goodbyes. Absolutely hate them.)

I was a hot mess. About 20 miles later, after I had finally gotten it together, Kristin sent me a sweet text which left me in a puddle of tears again. I’m so grateful for the time we were able to spend together!