As Chaucer penned, “All good things must come to an end.”

And apparently that includes vacations. I guess you wouldn’t enjoy them as much if they were an everyday thing though, right?

I wonder if this is what retirement will be like.

Quinn survived another morning walk. We slept in a bit longer today, so it was noticeably more toasty when we went out. 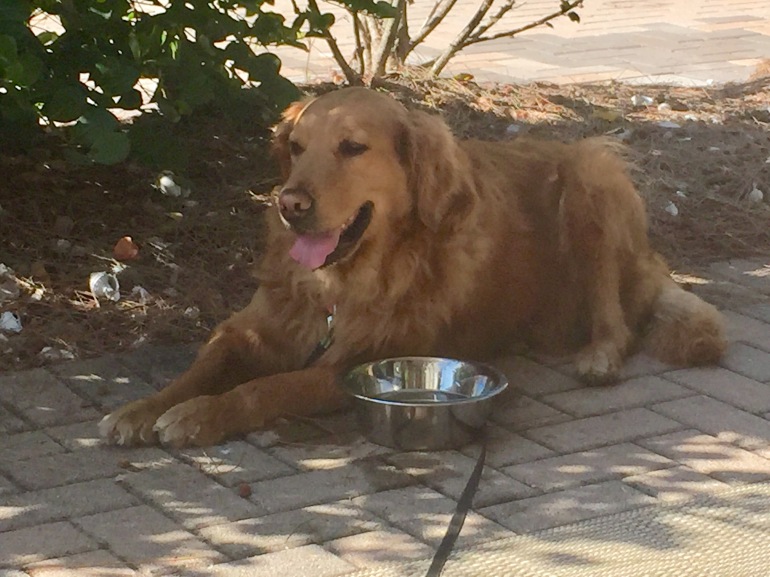 Breakfast was soooo good. The mango has be divine. Mango preparation, however, has not been divine. I’ve tried all different techniques, although I have yet to attempt leaving the skin on, and then cutting off the “cheeks” and scoring them. This makes for a very pretty on Instagram, but how the heck do you eat them? With a grapefruit spoon?

After yesterday’s breakfast debacle, I was eager to go back to my chia oats. Check out the hugh jass blackberries! They were as tasty as they look.

And here you have the hubby’s bowl. Not nearly as neat and tidy as mine, but apparently the taste is the same. (I probably should come clean and admit that I stir mine all up before I eat it. Not nearly as visually appealing, so no pictures have ever been taken.) 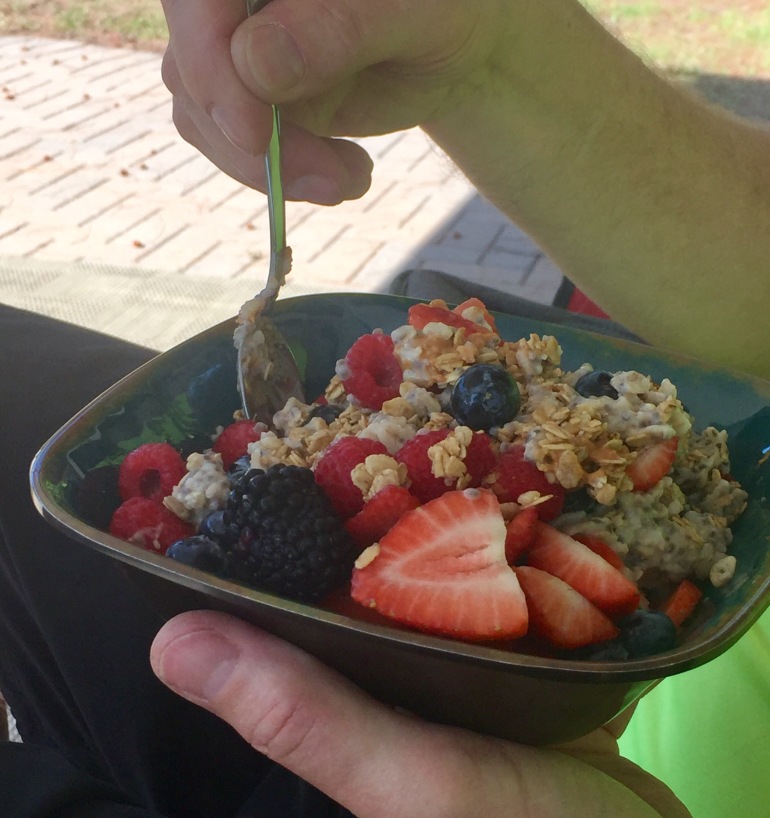 Today I decided to give my Bialetti a second chance.

Good choice! I poured it over ice and added some cashew milk, ‘cuz it was hot outside. Darn hot. 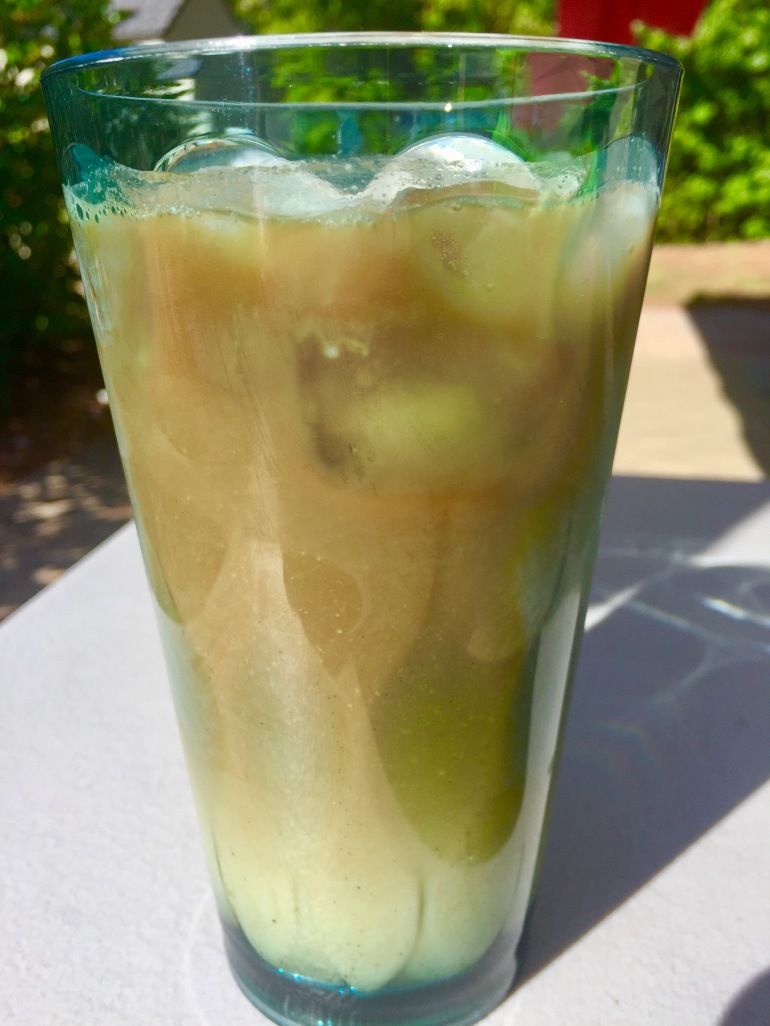 And then, feeling a need to squeeze the most out of every single minute of our last day, we jumped on the bikes. (Not literally of course…at our age that probably would not end well.)

It was a big day…we passed 71 cars on our way over the bridge to the island. 71! That’s a lot of cars. We were feeling all kinds of good about ourselves. 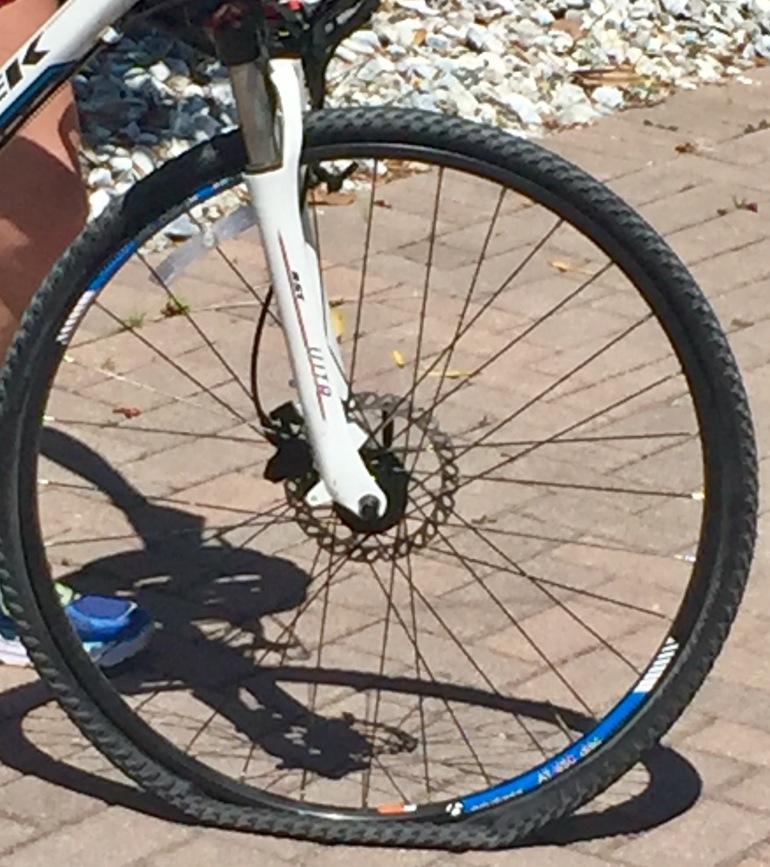 I provided an up close and personal just in case you were so enamored by my makeup free, ponytailed, sweatiness in the top picture that you missed the condition of my front bike tire.

The rest of the afternoon was spent next to the pool sweating profusely. I think this was the point where reality set in and I began thinking about all things school/work related…

which is probably why I felt a need for a late afternoon glass of wine to accompany my snack.

Dinner that evening was a restaurant repeat, as my husband deemed The Ugly Grouper as his favorite spot for grouper sandwiches. I didn’t argue…the black bean burger had been memorable as well.

And now for a random picture of a mysterious looking bird taken through a screen. I was a little freaked out as he (she?) was enamored with our window and kept flying into it.

After an evening walk, a “little” ice cream was in order.

Then, unfortunately, I had to set the alarm on my phone, as we wanted to get an early start for home the next morning.

I snapped this picture just as we were pulling out. I squeaked in a walk in the dark with Quinn (illuminated by flashes of lightning). Talk about motivation to get packed up and on the road! And now for the long ride home…